Facing the economic fallout of the COVID-19 crisis, many governments encouraged lenders to grant payment holidays to borrowers to prevent a wave of defaults. In some of our publications (see our COVID-19 trackers), we checked to what extent various asset classes were affected. Amongst others, we find that almost all data owners (mostly credit institutions) offered some form of payment holidays and that reporting is not yet homogenous. This study reassured our choice to use several factors to identify loans under payment holiday, as we did in our latest Auto COVID-19 Tracker, amongst others. We thus calculated an “implied payment holiday”, considering that a loan is in payment holiday if any of the three criteria was met since the beginning of the COVID-19 crisis namely 1) its maturity was extended or 2) its payment due decreased at least 50% or 3) its current balance increased.

by Eugenio Benetti and Marine Maitre

During Q3 2020, we surveyed a number of our data owners (mostly credit institutions) to enquire about the use of forbearance options and to find out how these loans were reported in our database. We found that almost all the data owners we contacted offer either full forbearance (possibility to temporarily suspend payments), partial forbearance (reduced payments, interest only) or both (Exhibit 1). Full forbearance was defined as complete suspension of payments (principal and interest due can be 0 for a certain period) whereas partial forbearance typically represents the possibility to make interest-only payments.

At the time of the survey, we found that 64% of deals conformed to reporting recommendations outlined in the Special Reporting Guidelines (Exhibit 2), with few differences across asset classes. This means that focusing on the recommended reporting alone may not always be sufficient to detect loan modifications due to COVID-19.

On the other hand, loan maturity modification appears to be a useful alternative to identify loans affected by moratoria. It is expected that when payments are suspended for a while, the maturity of the loan will have to be extended so that the borrower repays the loan over a longer period after the moratorium. This holds especially true for the consumer (89%) and mortgages (79% of cases) segments, as shown in Exhibit 3. 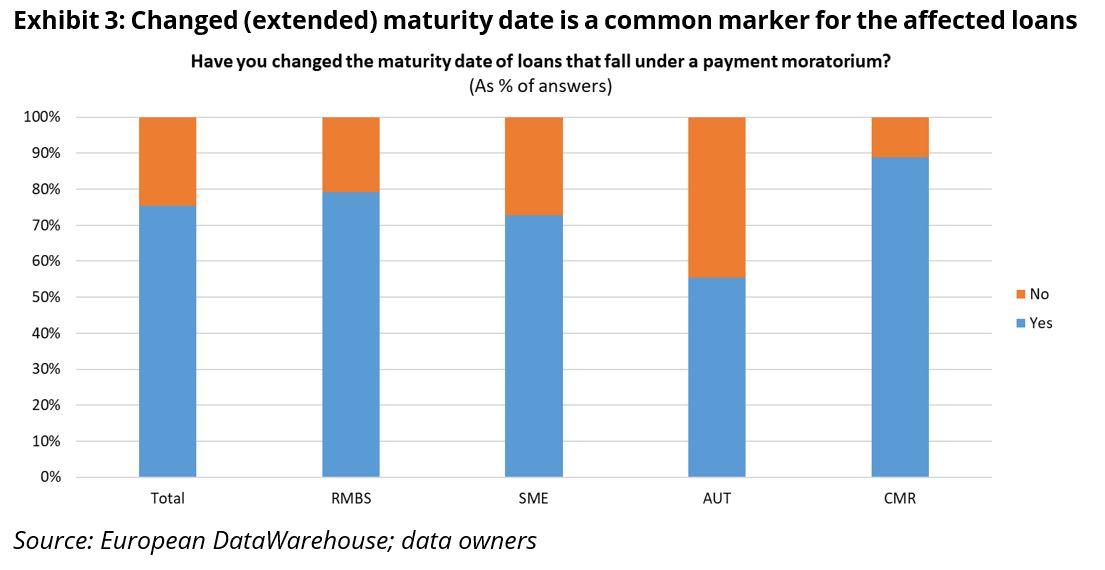 The recourse to widespread payment holidays was meant to have no repercussions on the credit status of the affected borrowers. Thus, it is expected that a performing borrower that would suspend payments due to a payment holiday should not be considered to be in arrears or in default. Conversely, a borrower that faced payment difficulties even prior to COVID-19 should not suddenly become reperforming upon obtaining a payment holiday. We find that indeed in most cases, the payment holiday has no impact on the account status of the borrower. By “account status”, we mean fields that flag the loan status such as:

Although the above mentioned status fields have an “arrears” option (except for SME), we find that for some of our deals, the arrears-related fields may imply that the loan is in arrears when the account status implies that the loan is actually performing. The reason for this may be, as we see in Exhibit 5, that for the loans under moratorium, the arrears related fields were not always kept static; thus, creating an apparent inconsistency in the reporting of delinquencies.

When a loan is benefitting from a moratorium, the loan amount is normally not amortising, but in some cases, arrears (including interests) may have to be capitalised. Thus, an increasing loan balance can be used as a marker of payment holiday. We found that for SMEs the loan amount is most often kept static whereas for other asset classes, this is not necessarily the case (Exhibit 6).

During the 2008 financial crisis, cases of loans being repurchased by the originators were commonly observed. We understand that this may happen either:

Under the circumstances, we would have expected to see such loan repurchases, but Exhibit 7 suggests that affected loans are typically not dropped from the pools. In some auto deals, though, the repurchase of loans modified due to COVID-19 appears systematic. 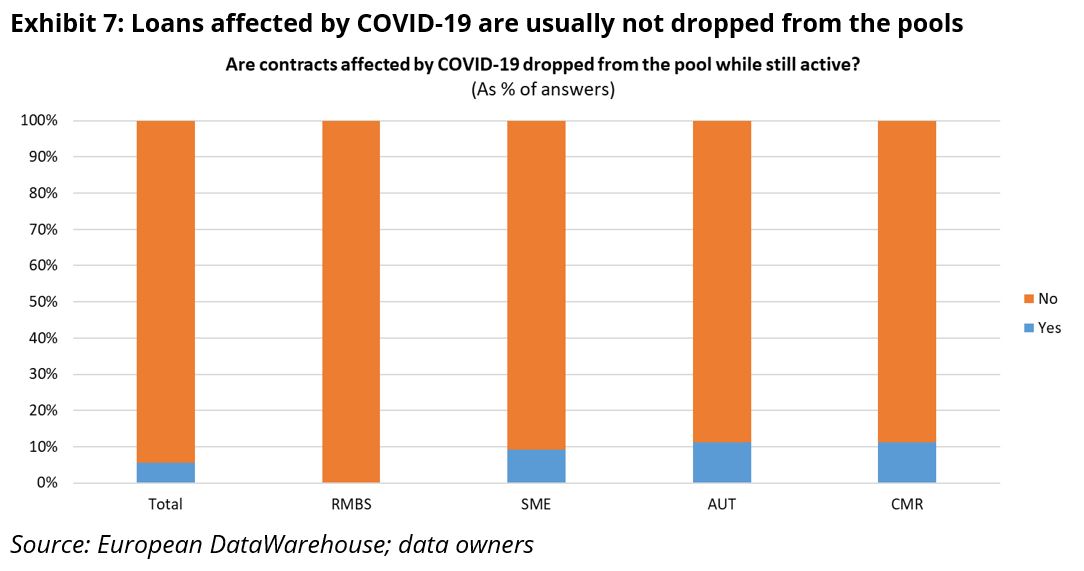 Our survey was conducted mostly by email, sometimes completed by phone calls; in some cases, EDW analysts completed the process by checking how reporting had been modified. For this study, we collected answers from 36 key data owners (who often are the originators but not always), accounting for 45% of all the currently active deals. Some are specialists covering only one asset class while others cover several asset classes. It is important to note that some questions were left unanswered, which means that for a given asset class, the number of answers may change from one exhibit to the next. We found also that as we were contacting them, some of the data providers were still in the process of adapting their reporting to the consequences of COVID-19.

Users can access the data on the ABS platform with European DataWarehouse’s cloud-based solutions EDITOR and EDVANCE, or a standard API interface, and analyse and compare underlying portfolios.

Data used in this research is uploaded by ABS issuers to comply with European Securities and Markets Authority (ESMA) and European Central Bank (ECB) regulatory requirements for asset-backed securitisation transactions, as well as Bank of England loan level data requirements.

For custom research reports or information on how to access the loan-level data yourself, please contact us at enquiries@eurodw.eu. Furthermore, if you have conducted research with our ABS data and would like us to feature it, please email us.